The terms and numbers you see on your portfolio can often be difficult to understand or misinterpreted. Here, we break them down for you in simpler terms:

Total Deposits: The total amount of deposits made that have been allocated to your Investor account

Total Withdrawals: The total amount of withdrawals that have been requested, including pending requests

Total Invested: Your total cumulative Investment amount which includes the re-investments from your repayments

Annualised Portfolio Performance: Weighted average annualised returns based on all the notes that you have Invested in, less the proportion of your defaulted Principal. 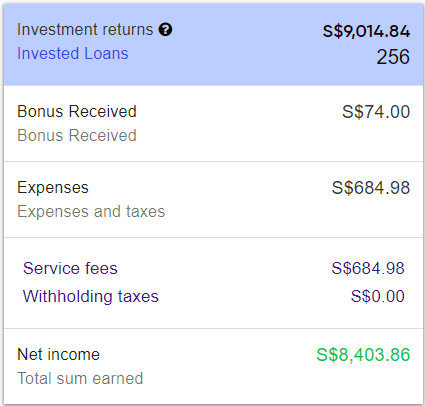 Number of notes invested: The total number of notes on your Portfolio that you have invested in, not including ongoing Crowdfunds
Loans Ongoing: The number of notes on your Portfolio that have not been completed and defaulted
Expected returns(S$): The total amount of Interest expected to be received, from the total invested amount
Annualised portfolio performance (p.a): Weighted average annualised returns based on all the notes that you have Invested in, less the proportion of your defaulted Principal
Repayments received this month(S$): The total principal, interest, and early repayments, received till date in the current calendar month
Expected repayments this month(S$): The total principal and interest expected to be received in the current calendar month
Outstanding principal (exposure)(S$): Principal that is still held in ongoing notes that have not been fully repaid
Principal defaulted(S$): The total amount of your Invested principal on notes that have defaulted

Upcoming Repayments: The expected principal and interest on notes Invested over the next 6 months, excluding defaults

To understand more about repayment schedules and status, take a look at this article:

To understand more about the status of notes that you have invested in, take a look at this article:

Did this answer your question?